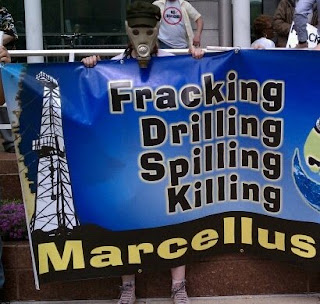 The press reports are starting to come in from today's meeting of the Marcellus Shale Advisory Commission. Governor Corbett has tasked the Commission to "develop a comprehensive, strategic proposal for the responsible and environmentally sound development of Marcellus Shale." Many people are skeptical that this is little more than a rubber stamp commission.

The governor and the commission itself have been accused of being top-heavy with gas industry representatives. Thirteen of the commissioners come from the gas industry. That number may now be twelve as the governor asked the Chesapeake Energy representative to leave over the disaster in Bradford County. Four environmental groups including the Nature Conservancy and the Chesapeake Bay Foundation are included.
The remainder come from state and local government officials and a geologist. That geologist is Penn State professor Terry Engelder who is a vocal gas drilling proponent.

As the Pittsburgh Post-Gazette reported earlier this year,

Thirteen of the members contributed a total of $557,000 to Mr. Corbett's political campaigns since 2008; 12 have ties with companies whose executives or political action committees contributed another $562,000; one is the son of a $300,000 contributor. All together that amounted to just over $1.4 million.

The lack of parity strikes some as slightly less than fair. But there is, to some, a whiff of insider dealing and political corruption. Some people with those views, and more, came out in force to today's meeting.

More than 100 protesters attended a noon rally outside the Department of Environmental Protection headquarters, where the commission is holding its day-long meeting. Following the rally, many went inside, planning to participate in the public comment period later this afternoon.

The dozens who filled the inner hallway blocked entrance to the meeting room and heckled several of the commission members as they tried to squeeze through the crowd.

One local activist, Gene Stilp, walked into the morning session and began handing out "delinquent drilling tax bills" to the commission members. He was quickly escorted out of the room, after saying the lieutenant governor was a "prostitute," because of his and Gov. Tom Corbett's campaign contributions from the gas industry.

According to the Capitol Ideas blog,

Don Waltz, a Pitt professor who appeared in the anti-drilling documentary "Gasland," faulted administration officials for not including representatives from the state Department of Health on the shale panel.

"The commission is fatally flawed," he said. "It is here to look at public health, but there is no one there from the Department of Health."

As one Facebook commentor wrote, "Korporate Kangaroo Kommi$$ion DESERVES to be disrupted!!!" The distrust is deep.

You can find information on the disruption on other sites including PennLive. They did, however focus some on what the day's meeting was supposed to do: air the scientific evidence of the environmental impact of drilling. Among the issues are damages to warblers, salamanders, and trout. Perhaps we can add to those serious habitat fragmentation, air pollution, water pollution, climate problems, soil compression, and the potential for proliferating invasive species because of clear cuts.

Each person had two minutes to speak and most were anti-drilling protesters.

Afterward, Cawley said the commission is devoted to transparency. He says some speakers' claims aren't backed up by science and fact, but he insists that he and Corbett are devoted to public health and safety.

The protestors would be happy to know that the commission is devoted to transparency. Based on what they are posting to Facebook, they hope to be a part of its process by informing it on at least public perception. As social scientists will tell you, the facts are sometimes irrelevant in the face of people's values and beliefs. If people value the land on which they live and that surrounds them, well blowout frequency might be irrelevant to them. Land or water or air will always trump a well pad.

We at Sustainability Now are most interested in the public comment period. We want to know what you said if you were there or what your perceptions were. As one other Facebook participant Lynne Whelden said, "I know we're only a flea on the hindquarters of gasocracy unlimited. But today we made them itch." Did you make them itch?

If you so desire, you can leave your comments in the comment section below or email them to sustainabilitynowradio@gmail.com and we might put them in a follow-up post.
Posted by Peter Buckland at 8:31 PM