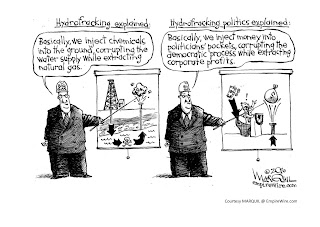 In April, Curt Ashenrood of the Keystone Trails Association spoke in favor of Pennsylvania legislature's House Bill 2235 that placed a "moratorium on leasing State forest lands for the purposes of natural gas exploration, drilling or production; imposing duties on the Department of Conservation and Natural Resources; and providing for report contents." The bill passed with Governor Rendell's signature and you can watch Ashenrood's testimony here, courtesy of Faces of Frackland.

Now it seems that we are in a less certain place. According to the Centre Daily Times, Pennsylvania's governor elect "lift Rendell's executive order preventing the issuing of any more drilling leases in state forests." According to Common Cause, as of May, Corbett was the "recipient of $361,207, with 93% of these contributions coming since January 2008." By the time the campaign ended the Centre Daily Times reports that he received nearly $1 million in campaign money. And now we have president Obama joining the cause according to NPR's Living on Earth who, following the recent "shellacking" by the Republican party, has decided to endorse natural gas development.

This is all potentially bad news for hikers, bikers, hunters, and fishermen and the plants and animals they so enjoy in Pennsylvania's expansive state forests.

Are you a hiker? What do you think about the moratorium?

Posted by Sustainability Now at 9:08 PM