Mann Scores a Goal with Hockey Stick and the Climate Wars 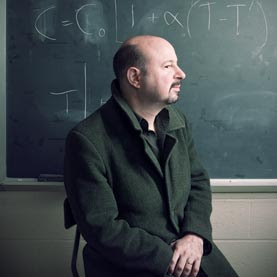 In his new book, The Hockey Stick and the Climate Wars, Dr. Michael E. Mann (pic at left from Scientific American) recounts a moment on the Great Wall of China just months before his daughter was born. He wonders about “what sort of world our new child and her generation would inherit.” It will be…No. It already is a world whose land and climate industrial humans have radically changed. The only truly moral response from any father must be to work for a world that mitigates human impacts on the climate so that his daughter and her children and her children’s children can live well and live happily. That means reducing our reliance on fossil fuel and creating new strategies – moral, behavioral, and technological – for living today and living tomorrow.

The Hockey Stick and the Climate Wars is a combination of personal storytelling, reflection, and science education that grants readers a tour of climate science. More importantly it shows us how our political process has been poisoned by shameless and corrupt interests. Reading Mann’s work is to get a sense of what it means to strive for thorough and important work as a “gee whiz” kid. But then we witness the “gee whiz” kid get schooled in the art of power politics and come out having outsmarted his opponents. For now anyway.

In 2009, I read story after story about hackers who’d stolen emails from the Climate Research Unit of East Anglia University and then released them. Journalists, eager for the next headline, ripped chunks from the climate change disinformation narrative. Thus was born “Climategate,” a shameful continuation of attacks on climate scientists by ideologues and fossil-fuel-funded institutes. Among the primary targets were "Penn State geosciences professor Dr. Michael Mann, co-winner [with many others] of the Nobel Prize in 2007 for his work with the Intergovernmental Panel on Climate Change, and the hockey stick" graph.

As a kid, Mann liked figuring out computer problems with his friends while other kids partied. The habit stuck. In The Hockey Stick, he narrates his growth from a physics and applied math major at Berkeley through graduate school at Yale. Initially, he tells us, he was drawn to climate science because he could use his physics and computational skills on a big problem: the earth’s climate. Like many scientists in the 1990s, he wasn’t sure what role humans played in forcing earth’s warming. His early work, including the investigations using historical climate proxy data like tree rings, corals, and ice cores, was depicted in the two “hockey stick” graphs. The second "hockey stick" (pictured at right) of which was used as exhibit A in the IPCC 2001 report and has since become the icon of the climate wars.

Briefly stated, the “hockey stick” shows that global annual temperatures oscillated over the last 1,000 years with a precipitous rise in the fifty years preceding the graph and its accompanying study’s publication in 1999. Combined with other numerous studies and models up to that point, this warming could not be accounted for without the human input of carbon dioxide, primarily from burning fossil fuels. In short order, a horde of well-funded people whom Mann and another author, Naomi Oreskes, refer to as the “merchants of doubt,” started a campaign to undermine the hockey stick and defame Mann. The merchants are the Catholic Church hierarchy to Mann's Galileo or the Bishop Wilberforce to his Darwin and Huxley.

Mann describes - in sometimes infuriating detail - how bloggers, pundits, industry-funded scientists (nearly never in climate science), think tanks, political action committees, and politicians attacked his work and harassed him. These include fake and sometimes plagiarized work like the 2006 Wegman Report, a piece never subjected to the scrutiny of Mann’s and his peers’ work. Some of this might be humorous had the Wegman Report not been used by Representative Joe Barton for odious pseudo-science-based political theater resulting in intimidation and near censorship. In the wake of the leaked emails, someone sent cornstarch in an envelope, a thinly veiled anthrax threat. These are just a couple of many examples Mann gives of the pummeling he received from hatchet men. But what didn’t knock Mann flat seems to have invigorated him.

What Mann does very best is to supplant doubt regarding climate change with a scientific, well-reasoned case for its reality and then a passionate and moral case for action on mitigating greenhouse gases. Like noted public scientists before him like Carl Sagan and Rachel Carson, Mann makes this about our better angels. Climate change is the greatest moral, social, political, and technological challenge to have ever faced civilization. If we follow the evidence science gives us, we the industrial people of the world have instigated a problem that already raises the seas over coastlines, creates unprecedented heat, droughts, storms, and floods, melts ice caps, and will further transform earth’s systems in ways that will make it harder for the majority of living things – including most humans – to survive.

I think is worth noting that climate change denial and disinformation is approaching the intellectual (and increasingly moral) equivalent to fringe ideas like Holocaust denial. These are my words, not Mann's. The facts of the Holocaust are overwhelmingly clear. The number of pieces of data supporting the historical occurrence of the Final Solution are well-known and there are good explanations for how and why it happened. With almost no equivocation, the lines of evidence from physics, chemistry, biology, ecology, meteorology, climatology, sociology, and the indigenous people of the world point with incredible clarity to the reality and gravity of climate change. We are at the point now, where actively denying these facts means deceiving yourself and those around you, interfering with good democratic process, and actively harming people alive on the planet now. Ask Mohamed Nasheed, former president of Maldives, a country losing ground to rising sea levels because of the warming climate.

I have to say, this book re-energized me. Friends of mine who have been active on this issue and I are thrilled that Mann has come through this crucible. In a recent interview with Chris Mooney on Point of Inquiry, he urged other climate scientists to come forward because other scientists have their backs. It isn't just climate scientists now. It's people from many "expert" fields and the public at large. This book, the subsequent attack by a coal-fronted astroturf campaign on Mann, and Mann's leadership probably Don Brown of Climate Ethics and I to organize the “Changing the Moral Climate on Climate Change” event on Monday, April 30th at 7 pm.

Go to your local bookseller and pick up a copy of The Hockey Stick and the Climate Wars. If you're in State College, you can purchase a copy at the fresh and local Webster's Bookstore and Cafe.
Posted by Sustainability Now at 2:26 PM