We can have more control over our diets than almost anything else we do. It's hard for a non-expert to control the fuel efficiency of our cars and trucks or the distances we are compelled to travel for our jobs. Face it, most of us feel pretty powerless when it comes to whether or not our power comes from coal, natural gas, or wind energy. But we have lots of control over what we eat.

One of the biggest impacts Americans can have on their diets is to reduce or stop their consumption of animal products. Suffice it to say that the total energy inputs that go into livestock like pigs, cows, and chickens are astronomical in comparison to grain 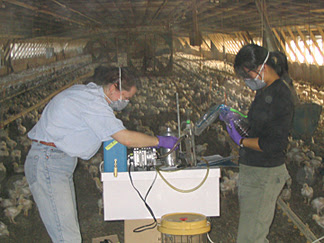 And this says nothing about the ethical implications of what the philosopher Peter Singer might call unimaginable animal suffering (see this blog about Singer's visit to Penn State last year). Animals in "factory farms" are sometimes beaten, are kept in filthy conditions that are highly toxic, and kept from having any pleasant contact with their own species.

Today's guest, Mick Kunz, president of the Penn State Vegetarian Club, will talk to us about why people choose to forgo animal-intensive diets. We will talk about the difference between vegetarianism and veganism and the range of differences in there including so-called "freegans." Whatever the range, the average vegetarian's diet has a smaller environmental impact than the average American meat eaters. Kunz will walk us through the moral, environmental, and personal health reasons people hold for going vegetarian and vegan and provide us with some tips on what we can do to reduce or eliminate our animal product intake.

Listen in today from 5-6 pm on The Lion 90.7 fm. Have questions or a comment, give a buzz at 865-9577 or send an email to sustainabilitynowradio@gmail.com.
Posted by Sustainability Now at 2:33 PM No comments:

Traipsing into the Marcellus Shale game

Over the last few years the natural gas industry in Pennsylvania has boomed because technology has enabled gas companies to get to new deposits in the Marcellus Shale. But how do they do it? For what alleged benefit? At what cost?

four states - New York, Pennsylvania, Ohio, and West Virginia. It is an ancient formation of sedimentary rock, rich in fossils, and rich in natural gas. Estimates place the possible gas volume at over 500 trillion cubic feet. Given the current economic crisis in the state, nation, and around the globe, the United States's dependence on foreign oil, and the reduced greenhouse gas emissions from natural gas, the prospect of this massive fossil fuel source is very attractive. How do they get it though?

In short, companies use a procedure known as hydro-fracking or fracking to inject upwards of millions of gallons of a mixture of water, sand, and chemical lubricants to force natural gas out of its deposits thousands of feet below the Earth's surface. This is the rub. The ecological side effects of the gas rush might be scary to say the least. Recently, a well blew in Clearfield County sending gas 75 feet into the air and contaminating the immediate area. That incident prompted a freeze at that site run by C.C. Forbes. This morning, WPSU reported that that the blown well had contaminated a local waterway. This explosion, mixed with Rex Energy's fine for encroaching on a local wetland, recent natural gas accidents in West Virginia and Texas, and of course the BP disaster in the Gulf have prompted already vigorous environmental advocacy groups to demand some accountability.

But proponents say these are isolated incidents and that the economic benefit to the region could be huge. Pennsylvania government, communities, businesses, and individuals stand to make billions upon billions of dollars they say. Communities have had contentious forums that have pitted neighbors against each other over water and land conservation, property rights, wealth, and regional control. Universities from Penn State to Bucknell have hosted talks.

So what's the rub? What's really going on?

Today we will get into this mess with Hannah Abelbeck of Voices of Central Pennsylvania, an independent newspaper written by and for central Pennsylvanians. She has done a few stories for recent issues and gotten to know people from around the state.

* You can backtrack through this blog's previous posts to see other media on the Marcellus Shale.

*** This show was featured in the May issue of Voices.
Posted by Sustainability Now at 2:42 PM No comments:

Since we are in the business of some talk radio, why not give a nod to some inflammatory talk radio?

I have long been flummoxed by Rush Limbaugh for many reasons. I once heard him say that Andy Revkin of the blog DotEarth should go kill himself if "he really thinks that humanity is destroying the panet, humanity is destroying the climate, that human beings in their natural existence are going to cause the extinction of life on Earth." That raised my and others' hackles.

Now he's taken to blaming the Sierra Club and "the greenies" for the Gulf oil disaster. Apparently, environmentalists are responsible for driving oil exploration and drilling farther offshore. Listen.

Strange that. I always thought it was the American industrial economy's appetite for oil that drove this and the huge profits that oil giants have made from it.

We report. You decide.
Posted by Peter Buckland at 9:32 PM No comments:

On Friday May the 28th SNR interviewed Assistant Professor of Coastal Geology and Oceanography, Dr. Alex Kolker, who currently studies coastal wetlands associated with the Mississippi River Delta. Dr. Kolker currently works at Louisiana Marine Research Consortium (LUMCON) located deep in the Mississippi River delta complex and has focused much of his career on coastal wetland sustainability. We talked about the vast ecosystem that is fed by this mighty river, and how the river's different ecology's speak to different points in time as the river shifts and changes. Channelization by humans has severely disrupted the rivers ability to feed sediment to the delta as well as maintain open water with its natural flood cycle. Changes in this ecosystem cause 20 plus square miles a year of coastal wetland loss, critical habitat that many indigenous and migratory species use as part of their life cycle. In this interview you'll also find how Dr. Kolker's research on hurricanes, "natures most powerful force on the face of the earth," touches on the connection between numerous anthropogenic causes of coastal habitat loss and the effects of these powerful storms on our gulf coast.
Posted by Sustainability Now at 1:35 PM No comments: